A rather special pork terrine 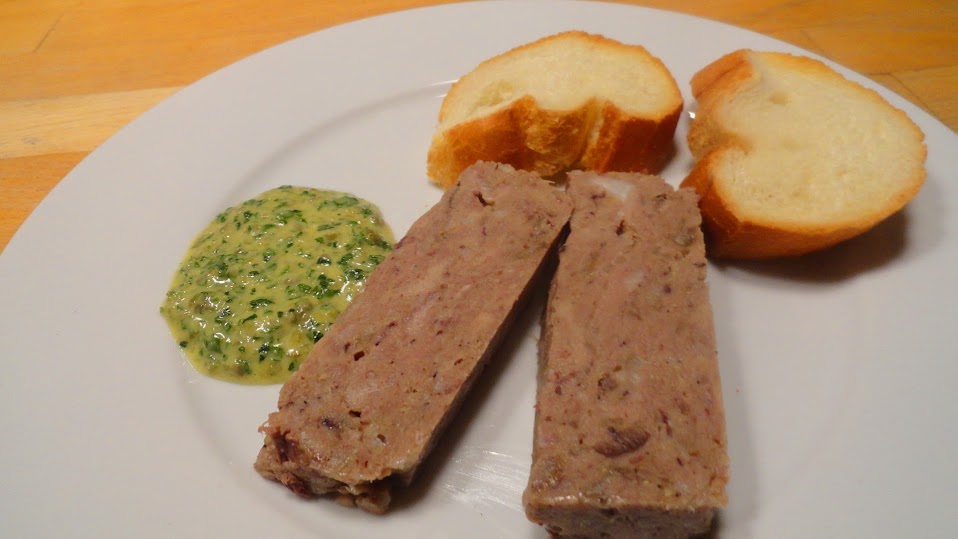 More often than not I have an all-consuming craving to work with, cook and eat the "offally" bits of animals which just aren't that popular. And last week I really found the mother lode when, in the charmingly-named "rubbish" section at CORA hypermarché, I spotted half a pig's head. I just couldn't believe it: 2 KG OF PIG'S HEAD - FOR UNDER 7 EUROS (£5.90)!

As with my lovely pig's trotters, I know that many people simply recoil in horror at the (for them) ghoulish sight of a massive, severed animal's head (or "Eugghh gross - a dead head!", as my 10-year-old screamed in panic when she peeked inside the shopping bag...I HAD alerted her though!), but that is not what I see at all: to me it's just the top part of a beautiful, majestic carcass with exactly the same firm skin, creamy layer of fat and with lots of lovely but sadly under-utilized meat underneath - surely this cut should be treated with the same respect? 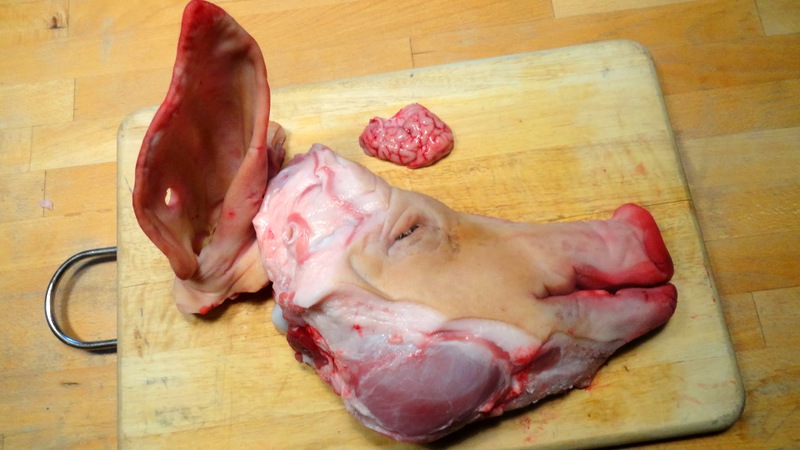 The best way to do this, I thought, was to turn it into a terrine using every edible morsel that the head - after simmering for five hours - would yield. I adapted (or rather simplified) the wonderful Tom Kitchin's Rolled pig's head recipe and the end result exceeded even my wildest dreams:  it was UTTERLY delectable with a wonderful texture, warm with the spices and herbs and with a perfect ratio of meat, fat and skin - and UNBELIEVABLY easy to make (yes, REALLY!) And, on top of that, SO cheap: there is more than enough for ten people as a generous starter - that's 70 cents (60p) per person...

Put the head, celery, carrots, onion, bay and thyme into a very large saucepan. Cover with enough water, bring to the boil, cover with a lid and simmer for ca 5 hours until soft and tender. 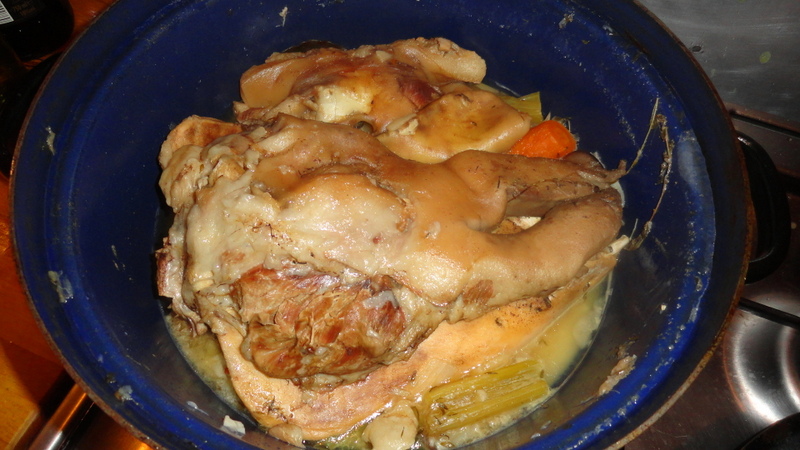 Use a large slotted spoon or set of strong tongs to remove the pigs' head from the pan. Allow to cool slightly.

While still warm, pick off all the meat, skin and fat. It will peel off really easily and you'll be left with the two pieces of clean-scraped jaw in literally seconds. Do the same for the ear – again you can just peel/rub off all the fat, connective tissue and meat until only the thin sheet of cartilage is left. (The only other two unedible bits left will be a ribbed lozenge of thin bone - the roof of the pig's mouth - and the eye which now resembles a cloudy-looking stone.)

Put everything into a big bowl and, either with you hands or with a wooden spoon, rub/scrape it all together into an uniform mass. Then add the spices, herbs and seasoning and beat together until well-mixed-in. 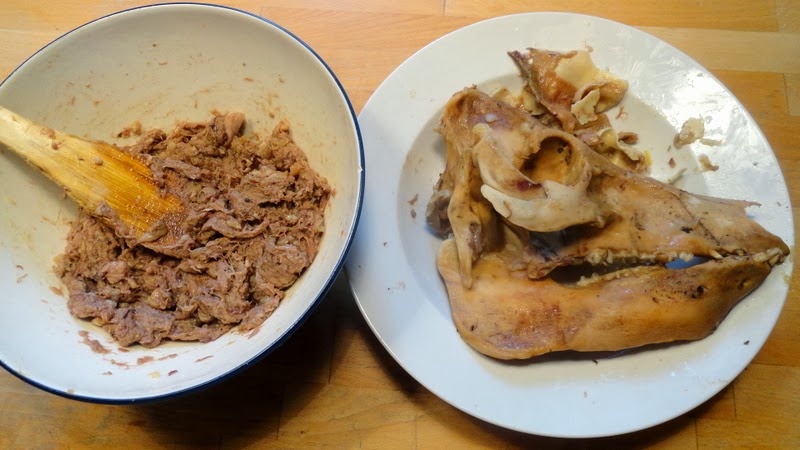 Line a 30cm x 12cm cake or terrine tin with cling film* at least double the size of the tin. Scrape in the mixture, press down firmly and fold over the sides of the cling film. To press and set the mix, place a couple of cans of beans or some other heavy weights on top**.

Leave in the fridge for at least 8 hours until firm.

The terrine goes exceptionally well with this sharp salsa verde which cuts through the mellow richness beautifully:

Put 2 tbsp each of parsley, mint, gherkins, capers, olive oil and lemon juice in a food processor. Blitz into a smooth sauce, adding a bit of water if necessary. Season to taste.

Notes:
Check the simmering pot once in a while and top up with water if necessary.
Don't throw away the cooking liquor: strain and use as a wonderfully tasty stock for soups or casseroles.
*For years I've cursed the "line the tin with cling film" bit as it's SO impossibly fiddly - until I came up with this brilliant idea: I use sturdy freezer bags instead to overlap/cut to size. No more scrunched-up film sticking to your hands!
**I scattered my two bags of baking beans on top of the terrine instead of tins.
The terrine keeps - well-covered with tinfoil and double-wrapped in cling film - for at least a week in the fridge.
I didn't use the brain as it's not that easy to cook (for example, it simply falls apart when lightly fried like sweetbreads) - but I WILL give it a try next time: waste not want not!

I find the most delicious - and easiest - way to cook white fish is with a breadcrumb crust, and I dish up one or the other of these at least once a month - recipes to come another day! But while on holiday last month I was completely blown away by another variation: crispy chorizo crumbs. The flavours were just amazing: smoky and rich, meaty yet delicate - and with an almost decadent "oomph"... So I Iooked up a few recipes when I was back home, fiddled around with them a bit - and am more than happy with my version! 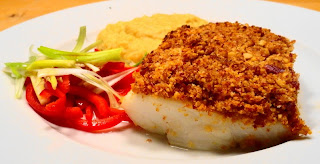 Preheat the oven to 200C/180C fan oven.
Put the chorizo chunks in a frying pan and cook over a medium heat until they become crisp in places. Then put them in a food processor, making sure to scrape in all the aromatic oil as well. Add the rest of the crust ingredients and blitz to a crumb.
Put the fish pieces on a baking tray (which has been lined with tin foil and oiled lightly). Shove them all together in one big piece so there are no gaps.
Heap the crumbs onto the fish pieces and pat down so they are all well covered. (If you have the time, let them firm up in the fridge for 20 mins).
Cook the fish for 10 - 15 mins until the flesh has turned opaque and the crust is golden.

Notes:
Look out for Skrei (also known as Norwegian Atlantic cod) for this dish as it's a much cheaper version of the "normal" cod.
Try to buy good-quality chorizo if you can afford to - you don't need much and the flavour is so much "deeper".
The fish goes extremely well with a white bean mash: simmer a tin of giant white beans in vegetable stock until soft, then mash into the stock and add a glug of olive oil. I only had a tin of chickpeas, but they were delicious too when prepared this way!