Now that The Big Chill has finally arrived in Brussels I just HAD to make one of my favourite winter warming stews which has been on the menu for over a decade now: Lamb Tagine. I would love to be able to say that this dish has been inspired by the wonderful Morroccan restaurants in my neighbourhood, but sadly no - it is of unashamedly British origin as I've adapted it from a recipe from the BBC's first ever cookery program "Food and Drink". (UK viewers will surely remember this culinary weekly must-view from the days when there were only four channels: hosted by "Big Face" Chris Kelly, it also launched the careers of the two 'wine experts' "Tipsy" Oz Clarke and "Mad Nose" Jilly Goolden.) However, the chef behind this recipe was "Larger Than Life" Antony Worrall Thompson (aka "The Forgetful Cheese and Wine Shopper"...)

But I digress so back to the dish: It is incredibly easy and SO SO delicious... I do not like cinammon in baking or desserts, but I adore it in savoury dishes - and here, together with the honey and the spices, it fills the house with the most amazing, North African aromas - simply divine: 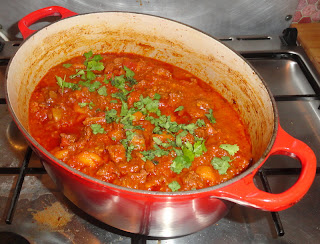 Combine the peppers, paprika, ground ginger, tumeric and cinnamon. Place the lamb in a large bowl and toss well with half of the spices. Cover and leave to marinate (ideally overnight).

Preheat the oven to 180°/fan 160°. Heat 2 tbs of the oil in a large pan. Add the onions, ginger and the rest of the spice mix and cook over a gentle heat until soft and aromatic. Tip into a casserole dish.

Bring to the boil, cover with the lid and cook in the oven for 2 1/2 to 3 hrs until the meat is meltingly tender.

Sprinkle with the coriander and serve with steamed couscous. Serves 4 - 6.


Notes:
To make this dish more economical, I always buy a whole shoulder of lamb and debone it myself - 1.5kg/1.7kg yields exactly 1kg of trimmed meat. It really isn't difficult to do this yourself: http://youtu.be/YUV2_Z4M2Ag

You can, of course, use any combination of these dried fruits - Aldi sell fantastic value 200g re-sealable bags of soft apricots, dates and figs for €1.29 each.

Let there be soup!

I love making soups and I'm always surprised that not every home cook regards them as an essential staple in his/her repertoire: they're so easy and quick to make, they're economical and versatile (you can make them super-filling and chunky - or serve them pureed down for a super-smooth, elegant dinner party starter) - but above all they are SO delicious!

One of my all-time favourite vegetables is the Jerusalem artichoke, and I can hardly contain my excitement when these dusky-pink, knobbly tubers hit the greengrocers in November. They have a wonderfully unique flavour and texture: sweet and nutty with a slightly crisp bite... they are truly tantalizing! You can use them like "exotic" potatoes: steamed, roasted, mashed, in a creamy gratin, in salads (boiled or raw) - or in this absolutely wonderful: 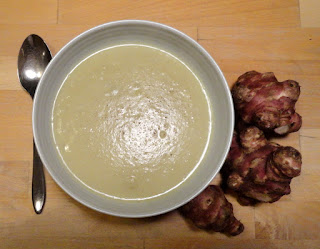 Sweat off the onion, garlic, artichokes and potatoes in a large pan. Add the stock, bring to the boil and simmer for ca 30 mins until tender. Liquidize to a puree and add seasoning to taste.

Notes:
This serves 2 for a substantial supper (with bread) or 4 for a starter (or thin it down with some more stock for six).
Posted by Gigi at 08:57 No comments:

My favourite dish of all of last year is, admittedly, not something you can just pick up at your local Tesco Metro/Delhaize City, but "bear with" as it is the most delicious food in the world: Räucheraal (smoked eel). Its flesh is unlike - yet far superior to - that of all other smoked fish: rich and dense with an almost creamy, delicate texture - simply divine.

But this dish also has huge sentimental value for me - it takes me straight back to my childhood kitchen table in Northern Germany and seated next to my late mother. She was - like many Bremer(innen) - the most extreme and seasoned Räucheraal connoisseur and ran her "eel procuring business" like a tight ship. Suppliers who didn't come up to scratch would be dropped ruthlessly ("I had to let go of that last one - nasty business..." she would mutter darkly over the phone, "but don't worry - Lotte (her local "runner") and I found someone up Bremerhaven way - he's got the real stuff!") No surprise then that both she and I were hardcore users: once the latest delivery was on the table, we would both tuck into "one each" swiftly and feverishly and didn't stop until the last piece of bone had been sucked clean and the last piece of skin had been scraped clear of all its remaining fat...


But the really, really best days where when my uncle Rolf fired up the battered old tin drum in his shed and smoked his own eels (which he'd caught himself in the river Weser that morning) - and then carry all 10/12 of them still supended on the metal smoking rod into the kitchen, dripping their fat all over the floor. Our part of the loot was speed-wrapped in foil and newspaper and we'd make a swift getaway so we could devour them at home while they were still hot!

Last year I took Rolf's widow to her favourite Aalräucherei in Bremerhaven where she insisted on buying us a wonderfully juicy and fat Aal. Once back in Brussels, I turned it into the most wonderful and delicate: 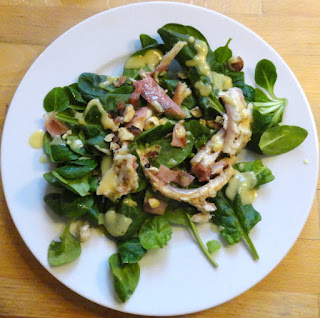 30g hazelnuts
4 bacon rashers (without rinds)
4 generous handfuls of lamb's lettuce
200 - 300g smoked eel
6 tbs hazelnut oil
4 tbs vegetable oil
2 tbs tarragon vinegar
4 tsp smooth mild mustard
Cut the eel into 6cm pieces, discarding any skin and bones.
Toast the hazelnuts lightly in a dry pan. Remove and set aside to cool.
Put the bacon in the (still dry) pan and fry until crisp.
Crush the nuts coarsely with a rolling pin (in a ziplock bag), and cut or crumble the bacon into pieces.
Put a handful of lamb's lettuce leaves on each plate and scatter over the nuts and bacon followed by the eel pieces.
Whisk the dressing ingredients with seasoning to taste and spoon over each plate.

So please please please give smoked eel a try: it is easily available online, it won't break the bank as a little goes a long way - and it freezes extremely well.
Posted by Gigi at 09:28 1 comment: