Three cheers for my Chardonnay chicken!

Today I give you another fantastically tasty (and of course easy) dish which is one of my favourite chicken recipes of all times: coq au vin blanc. It gives maximum flavour with minimum effort - and cost: because it tastes so luxurious and velvety-rich (but without the "too-heavyness" of its red wine counterpart), I somehow never focused on the fact that it is extremely economical: it costs just under €8.50 for the main ingredients - that's €2 per head ONLY! Fine dining surely doesn't get any cheaper (OR BETTER!) than that - so bon appétit tout le monde! 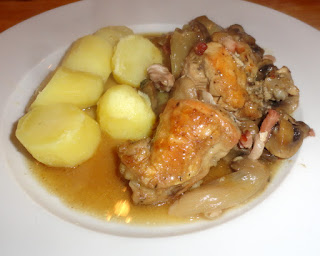 Preheat the oven to 180°/160° fan oven.
Put the seasoned flour and the chicken pieces into a large ziplock bag. Close and shake until well coated.
Heat 1 tbsp of the oil in a large pan, add the bacon and fry until crisp. Remove with a slotted spoon and put into a large casserole.
Add another tbsp of oil and the butter to the pan, then add the shallots and mushrooms and fry until golden, adding the garlic after a few minutes. Add to the casserole, tuck in the bay leaves and add the thyme.
Heat the remaining oil and fry the chicken pieces until dark golden (you may have to do this in two batches). Put in the casserole and then flash the pan with the stock and wine. Pour over the chicken and vegetables, add the sherry and seasoning. Then cover with the lid and bring to the boil.
Put in the oven and cook for ca 90 mins until the chicken is done (insert a metal skewer into the thickest part of a thigh - the juices should run clear). If not, cook for another ten mins or so.
Serves 4 with boiled potatoes or mash.

Notes:
* You can, of course, buy already jointed chicken pieces, but I always joint a whole chicken myself - it's so much cheaper and not difficult at all: http://www.finecooking.com/item/18461/how-to-cut-a-whole-chicken-into-pieces And I always include the back chopped in half in casseroles as well - my cook's treat...
** If a skinned shallot separates into two, then these count as two.

A trio of tastylicious trotters

I am a more-than-committed carnivore, but above all I adore the "off-cuts" of animals from nose to tail: pig's ears, sweetbreads, beef tongue, veal cheeks/head, bone marrow, oxtail... and, of course, pig's trotters. These are so underrated, but they are SO full of flavour - and SO cheap: at my Delhaize supermarket they sell them on their "offal Friday" for around 85 cents (60 p) each. (And I can't be the only Belgian customer who loves them - even at the poshest branches they will have sold out by Saturday). But what to do with the boys once you get them home? I'm aware that a lot of people are squeamish about handling them (my own children dared each other to "touch them up" - then ran away shrieking and retching... lightweights!) so I'm giving you three lovely recipes which become more and more "trotter tactile" as we go along.

So let's start with the easiest to "handle": just chuck them into a pot to make the most aromatic stock for the most delicious pea soup. This was a staple of my childhood, but my mother used Schweineschwänze (pig's tails) instead - I fondly remember them curling up jauntily out of the cauldron! 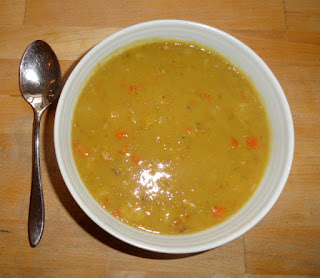 Put two pig's trotters into a big-enough pot. Cover with a generous amount of water, add two large onions (skinned but not chopped) and a small bouquet garni (parsley, thyme and bay leaf). Bring to a boil, then simmer for three hours. Now take out the trotters, onions and herbs and drain. Let the stock cool completely until it is a solid mass of jelly. You can then scrape/spoon off the layer of white fat and discard. When you're ready to make the soup, sweat off a handful of bacon bits/chopped-up rashers in a bit of oil. Add 2 medium chopped potatoes, carrots and onions each. Add the stock, lots of seasoning and 250g dried green split peas. Bring to the boil, then simmer until the peas are soft (30 mins to 1 h).

The next delicious recipe uses the already cooked trotters and onions - how convenient is that? It's straight from the fantastic "Ripailles" cookbook and it turns the humble trotters into a wonderful, tasty starter - good enough for any dinner party. It has also made me discover bric pastry, which, to my shame, I'd never used before - despite seeing it every day at my local greengrocers. Bric is basically the insanely easy-going, non-temperamental cousin of the filo pastry - each round, wafer-thin and porous sheet folds like a dream! So here goes: 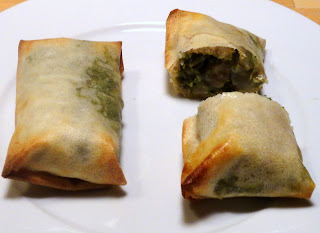 Take off the trotters' skins (scraping off the tissue inside) and discard them, and then pull off all the meat, tissue and fat from the bones. You can do this with your hands and with a knife. You will end up with a mostly gelatinous and rubbery mass which won't look very impressive, but trust me: this is "the good stuff" you want. I admit this is a bit of a labour of (pig) love, but I find this job very relaxing: you can take your time, and being left with just a pile of scraped-clean bones and knuckles is extremely rewarding!

Then heat your (thawed) spinach in a pan and cook off as much of the water as you can, then drain in a sieve. Now put the spinach with the rest of the ingredients (and with LOTS of salt and pepper) into a food processor and whizz down. Then shape into a large sausage and roll up with cling film and chill for at least an hour. Cut into 4 portions. Cut the bric sheets in half and peel off their papers. Lay two halves on top of each other but with the diagonal sides on the outside. Wrap each parcel with their bric sheets and cook in the oven at 160° for 15 mins until golden. Serve with a green salad with a mustard dressing.

My last recipe is quite "cheffy", but it's still very easy - and it tastes out of this world! It's based on the great French chef Pierre Koffman's legendary stuffed trotters recipe, but I've pared it down somewhat. You will have to debone the (uncooked) trotters yourself, but this really isn't complicated: take a long sharp boning knife and work it under the skin as close to the bones as possible. Then saw up and down and all around, pushing your knife up to the first knuckles as far as possible. Once the skin is loose everywhere, cut a slit at the back. Pull the skin down until you can see the knuckles. Wriggle them around so you can see where to cut through - front and back. All done now - your skin should look like a glove puppet with toes attached! 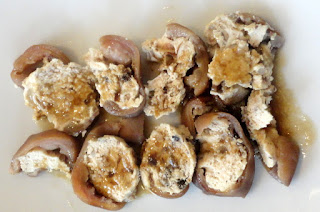 Preheat the oven to 160º. Lay each trotter on two long-enough pieces of string. Insert the bone parcels again and tie up the skin around them (this helps to retain the skins' shape and also adds extra flavour).

Place the trotters in a casserole with the diced carrots and onions, the wine, port and stock. Cover and braise in the oven for 3 hours.

Fry the mushrooms and chopped onion in the butter and cook for 5 minutes. Leave to cool.

Snip the strings off the trotters and remove the bone parcels. Open the trotters out flat and lay each one on two large pieces of tin foil. Leave to cool.

Fill the cooled trotters with the chicken stuffing and roll up tightly with the foil. Chill in the fridge for at least 2 hours.

Preheat the oven to 220º or prepare a steamer, and when the water is simmering, steam the foil-wrapped trotters until heated through. Alternatively, put the trotters in a casserole, cover and heat in the oven for 15 mins.

Meanwhile reduce the stock by half. Whisk in the butter and pour the sauce over the trotters.


Notes:
To make the soup even more authentically German, use 1 generous tbsp of Maggi seasoning.
I often use the left-over roast potatoes, carrot and onions from the Sunday roast as the soup vegetables.
Do check/stir the soup regularly after 10 mins or so - you might need to add more water.